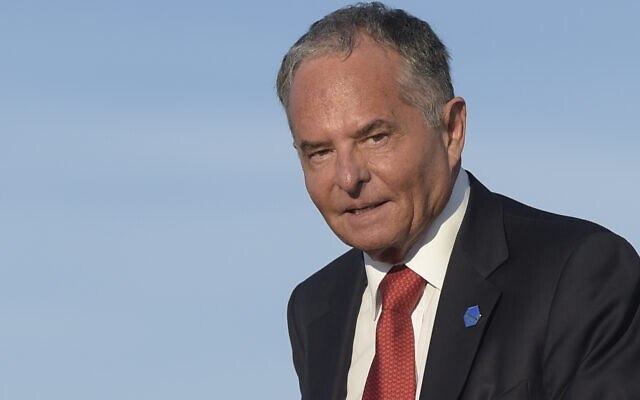 Isaac Perlmutter, an Israeli-American billionaire, and then CEO of Marvel, walks down the steps of Air Force One at Andrews Air Force Base in Maryland, February 6, 2017. (Susan Walsh/AP)

A Florida court has dismissed a libel suit against the former owner of Marvel Entertainment, billionaire Isaac Perlmutter, that claimed he was behind a hate mail campaign against a Canadian businessman with whom he’d had a spat over a tennis court.

Harold Peerenboom had accused Perlmutter and his wife, Laura, of slandering him as a pedophile and an antisemite over a number of years beginning in 2012. The accusations led to a legal battle of nearly eight years.

Perlmutter, who was born in the British Mandate of Palestine and grew up in Israel, admitted sending out media articles in June 2011 about Peerenboom’s business dealings, but denied being responsible for incidents over the following years that took a nastier tone against the Canadian.

“There is no evidence whatsoever that the Perlmutters had any hand in those mailings,” Cymonie Rowe of the Fifteenth Judicial Circuit Court ruled.

She named the real culprits as David Smith, a former employee at Peerenboom’s company Mandrake Management, who had been fired in 2011, and his friend Tom Thorney.

“And at this stage of a now nearly eight-year-old case, Peerenboom concedes that he has no evidence linking the Perlmutters to anything except the June 2011 mailing, which Isaac Perlmutter has admitted to sending,” Rowe said.

She noted that the claims about the 2011 mailings by the Perlmutter are beyond the statute of limitations for a libel suit and do not meet the criteria for a claim of intentionally causing emotional distress.

Attorney Roy Black, representing the Perlmutters, told CBC News that his clients were “thrilled” at the outcome.

“Now they’ve been completely exonerated. So it’s an enormous burden off of them,” he said.

The saga began as a 2011 dispute over the management of a tennis court at the Florida condo complex where Perlmutter and Peerenboom both own apartments. At the time, the Perlmutters sent news reports about Peerenboom to other residents.

Later, from 2012 to 2015, thousands of anonymous letters were mailed to Peerenboom’s friends, family, and business associates, condo residents, and Peerenboom himself. The letters falsely claimed Peerenboom was a child molester, corrupt, and a Nazi.

Peerenboom then sued the Perlmutters, who admitted to the 2011 mailings but adamantly denied the rest.

Smith emerged as a suspect in 2016, when US customs agents in Detroit found a hate mail package that contained letters similar to those used in the campaign against Peerenbom, along with latex gloves. The package had been mailed from a UPS store in Toronto to one in Florida.

Two of the letters were addressed to Peerenboom, and two to Mandrake employees.

The US Department of Homeland Security was able to trace the packages to Smith. In her ruling, Rowe said it had been established that Smith was behind the hate mail against Peerenbom.

However, the legal war between Perlmutter and Peerenboom is not yet over.

In an ongoing counter lawsuit, the Perlmutters accuse Peerenboom of stealing samples of their DNA by arranging for them to handle special paper when they were giving testimony at a 2013 disposition hearing in Florida. The Perlmutters claim Peerenboom wanted their DNA samples to back up his claims against them, and that the method used to collect it violated a Florida law on surreptitious DNA sampling.

Perlmutter emigrated to the US from Israel and went into business. In 1996, when Marvel Comics went bankrupt, he took over the company, turned it around, and in 2009 sold it, along with Marvel Entertainment, to The Walt Disney Company for $4 billion. He is a close personal friend and campaign financier for former US president Donald Trump.